Gay Nepal Trip: Take yourself off the beaten track and explore two of the world’s most culturally rich and historical countries set amongst the Himalayan mountains, each with their own stories to tell. Take in spiritual temples, fascinating traditions, grand palaces, friendly locals and spectacular scenery along your journey.

This gay group trip takes in UNESCO World Heritage Sites of Pashupatinath and Kathmandu Durbar Square, the “Tiger’s Nest” Monastery, Swayambhunath aka the “Monkey Temple”, and many more highlights. The Nepal and Bhutan Himalayan Adventure is made for those seeking an authentic experience in a world where that is hard to come by. 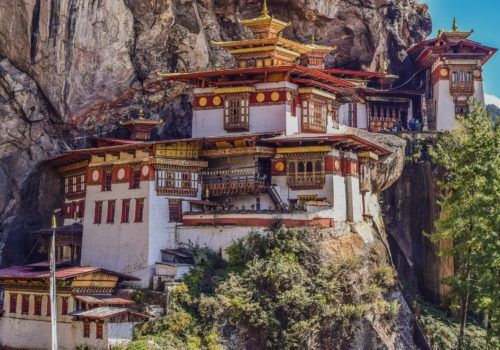 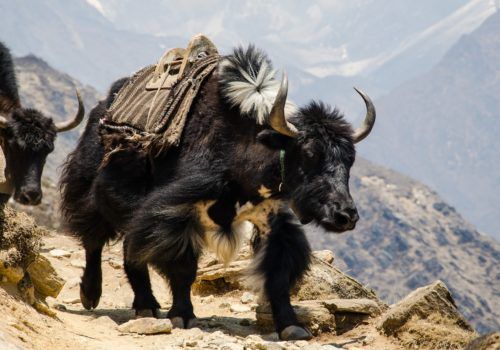 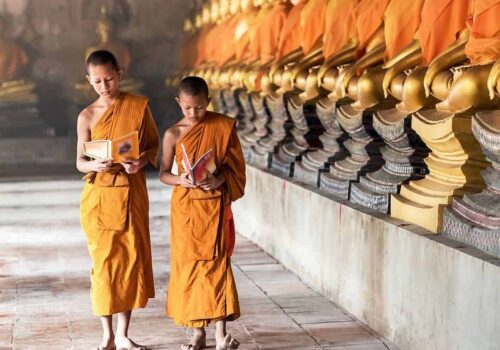 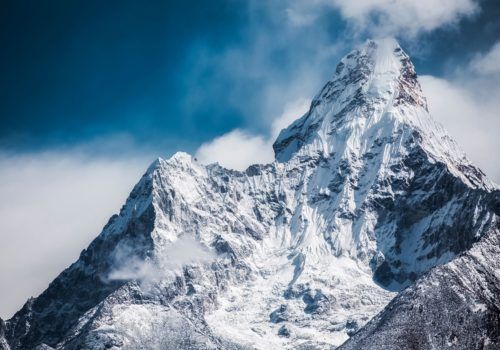 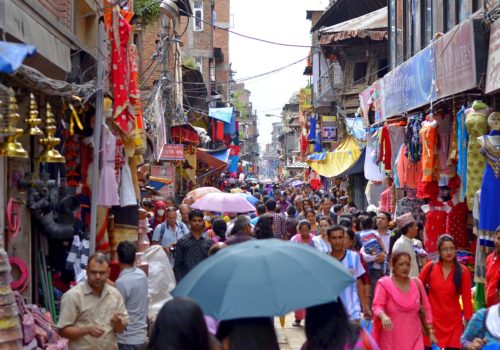 Our representative will meet you at Kathmandu airport, the capital of Nepal. Once you have arrived in one of the world’s most historical cities you will first be taken to the hotel for check in before taking part in a sightseeing tour of one of the most important and recognised Hindu Temples, Pasupatinath – a well-known pilgrimage destination. Your tour will continue on to the city of Boudhanath where many traditional Buddhist rituals and celebrations occur throughout the year when Buddhists from far and wide across Nepal and Bhutan come together.

Over four days, we’ll see the highlights of Katmandu, one of the world’s oldest cities. You’ll see Patan City, the oldest settlement in the valley. Around five kilometres south-east of Kathmandu City, it’s home to a stunning Golden Temple and the Krishna Temple in the Patan Durbar Square.

You’ll also get the chance to visit Kathmandu Durbar Square, a UNESCO World Heritage Site. Nepalese royalty once lived here Hanuman Dhoka (The Monkey God’s Gate). There are many temples to Shiva to explore. We’ll then head to Swayambhunath on the hill overlooking the city. It’s one of the oldest Buddhist stupa on the planet. Said to be over 2000 years old, the eyes of the Buddha gaze down on the world. The temple embodies the hybrid Hindu-Buddhist belief system that many locals practise. It’s also known as the “monkey temple” as a lot of monkeys make their home in the local area. 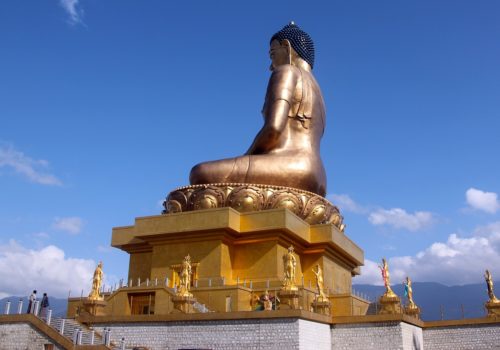 Day 5: Kathmandu To Paro And Thimphu

We’ll fly to Paro late morning and drive to Thimphu, the capital of Bhutan. Check into the hotel and spend the day at leisure. We’ll have dinner together in the evening. 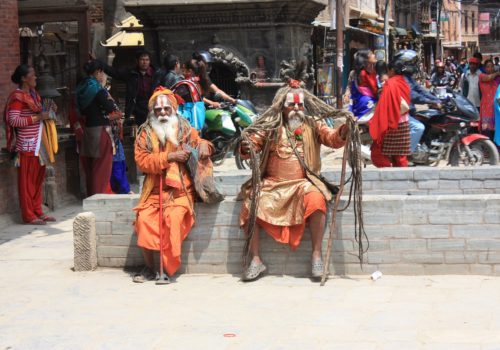 In the morning you’ll embark on a tour of Patan City, the oldest settlement in the valley. Patan City has a reputation for producing the finest artists and craftsmen and began construction in around 299 AD. Be amazed by the various bronze and wooden gateways and windows, wood carvings and metal work that all showcase the fine craftsmanship and architecture in Patan City, especially at the beautiful Golden Temple and Krishna Temple in the Patan Durbar Square.

After a hearty lunch, you’ll leave for Bhaktapur. The city is famous for its grandiose palace complex situated right in the centre surrounded by many equally stunning traditional temples. The former King’s residence, “pachpan jhyaley mahal” (Palace of 55 Windows), in the middle of Durbar Square is a must-see, alongside other wondrous sights such as the Big Bell, the Golden Gate, five-tiered Nyatapola Temple and Bhairab Temple. 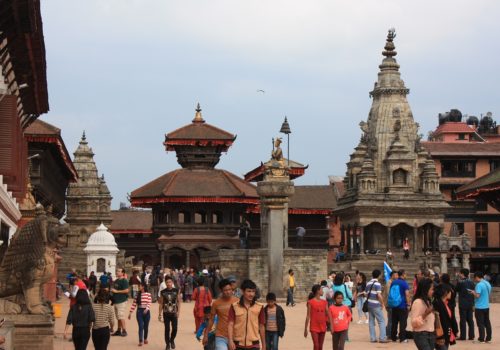 In the morning you’ll visit the UNESCO World Heritage Site of Kathmandu Durbar Square where the Nepalese royals used to reside in Hanuman Dhoka Palace. Surrounding the palace are an abundance of temples dedicated to different gods such as Shiva the Destroyer, Vishnu the Preserver, Indra the God of Rain and Goddess Taleju, the latter of which is only open one day a year on the widely celebrated festival Dashain in Nepal. You’ll also find the temple of the Virgin Living Goddess who comes to her ornate window to greet visitors to the temple.

Afterwards, you will visit the oldest Buddhist stupa in the world – Swayambhunath. This monument sits on the top of a hill gazing over the city of Kathmandu and is said to be where the all-seeing eyes of the Buddha watch over the world. Here you’ll find many monkeys roaming around which has given rise to the recent nickname of the temple as the “Monkey Temple”. 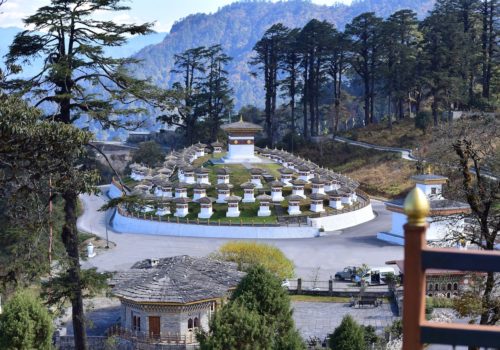 In the morning you will be transferred to the airport ready for a flight to Paro. From here you will be driven to Thimpu, Bhutan’s capital and largest city. Rest of day at leisure. 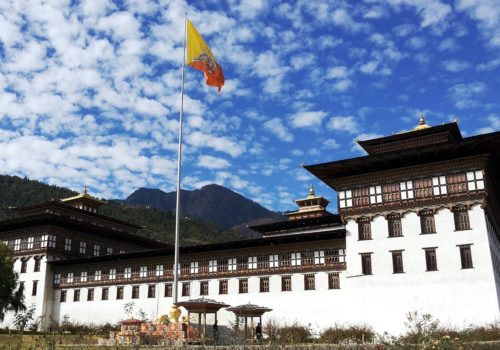 Today we’ll visit an arts and crafts school and a traditional house. The Changangkha Lhakhang temple dates back to the 15th-century. It’s dedicated to the Buddhist god of compassion. You’ll see excellent views over the valley from this temple. We’ll have lunch at a local restaurant and visit Memorial Chorten, built in 1974 to honour the 3rd King of Bhutan. We’ll also visit the Motithang Takin Preserve. The takin are docile creatures, said to be a creation of 15th-century saint Drukpa Kunley, better known as the “divine madman.” 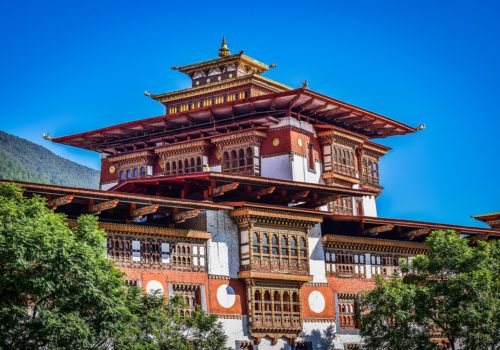 After breakfast, you’ll embark on your journey to Punakha where, along the way, you can enjoy stunning views of the mountainous landscape. Punakha was the capital of Bhutan up until the 1960s and still retains its regal atmosphere. You’ll visit the 108 memorial stupas that were built by the eldest Queen Mother of the country, Ashi Dorji Wangmo Wangchuk. After this, visit the fertility temple of ChimiLakhang in the Punakha Valley.

After lunch you’ll visit the beautiful ancient fortress of Punakha Dzong which towers on an island making for a picturesque image. This fortress contains many well-preserved antiques from the days when the kings of the country used to rule from this valley. 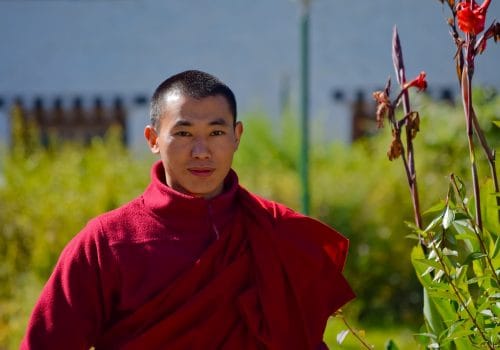 After breakfast enjoy the ride to Paro where you’ll check into your hotel and enjoy a lovely lunch. Paro is a place of history and is well known for the many sacred and historical buildings that stand there. The Valley of Paro is also thought to be one of the most stunning valleys in the whole country. Here, you’ll visit the National Museum (Ta Dzong) where you’ll find a multitude of artistic artefacts, religious paintings and a national history collection. You’ll also take in the large Buddhist monastery and fortress of Rinpung Dzong, otherwise known as the “fortress of the heap of jewels”, built on a hill overlooking the town. Rest of day at leisure in Paro Town. 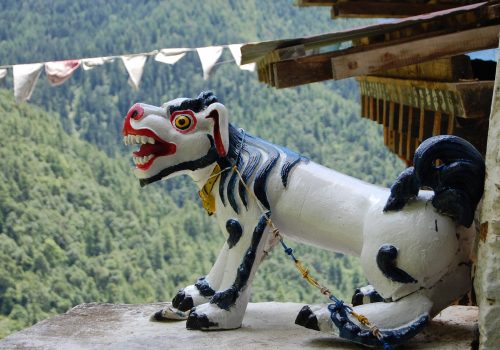 In the morning, after breakfast, hike up to the eye-catching Paro Taktsang, otherwise known as the “Tiger’s Nest”. This is a monastic retreat built 3120m above on a cliff face above the green Paro Valley and is the most famous temple in Bhutan and is famously a well-respected pilgrimage site. The 8th Century Buddhist saint Padmasambhava, who is cited as bringing the teachings of Buddhism to the country by flying over the mountains of Tibet on the back of a tigress, is thought to have landed here. To end the day, you’ll stop off for lunch at a traditional teahouse with unrivalled views of the monastery. 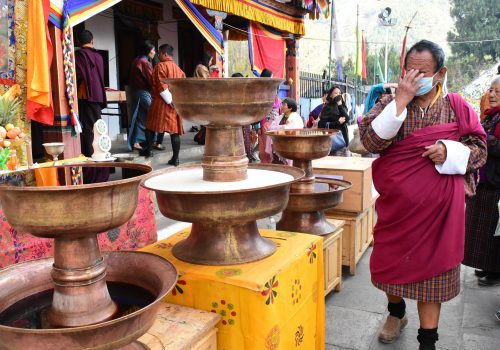 On this day, you’ll enjoy your breakfast before you are transferred to the airport, ready to catch your departing flight.