For such a small nation, Cambodia packs a lot in and its highlights are among the region’s most exhilarating. Chief among these are the mind-blowing temples at Angkor, but the country is far from a one-hit wonder.

The relaxed city of Battambang boasts a thriving art scene and amazing colonial architecture while Phnom Penh has emerged as one of the region’s most vibrant capitals with a dining and cultural scene to rival any. 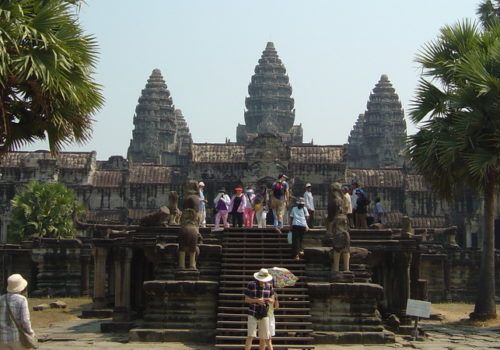 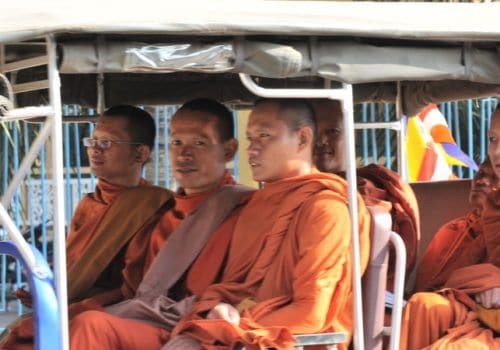 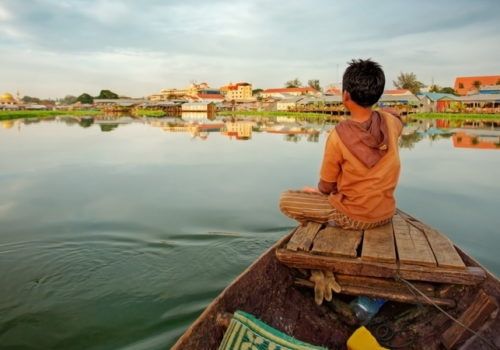 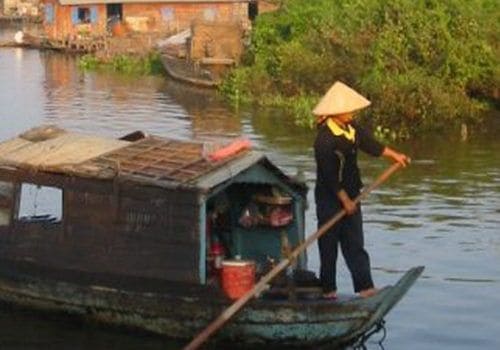 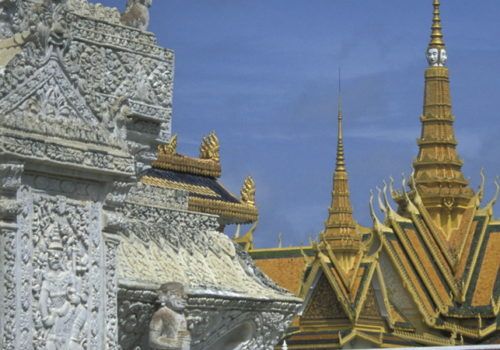 Upon your arrival in Siem Reap, you will be welcomed by your local English speaking guide who will accompany you to your hotel for check-in.

Enjoy some time at leisure. 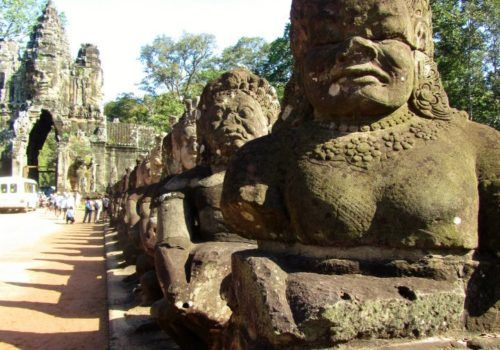 After your breakfast, take a trip to the ancient city of Angkor Thom on a ‘remork’ (similar to the Thai tuk-tuk). Angkor Thom was the last capital of the Great Khmer Empire during the reign of Jayavarman VII. This city is surrounded by an 8-metre high wall, forming a perfect square. Enter the city through the ancient South Gate, an impressive stone structure carved with Elephants and four giant faces. On each side of the entrance a row of 54 gods and demons can be seen holding the sacred Naga snake.

Then continue to Ta Prohm temple, built in the mid-12th to early-13th centuries. Ta Prohm is unique in that it has been left largely as it was found: overgrown by jungle trees and vines, with many parts of the temple crumbling to the ground. This makes Ta Prohm one of the most picturesque and memorable of the Angkor temples.

On this day you’ll visit the biggest religious temple in the world: the magnificent Angkor Wat. Built by Suryavarman II in the early 12th century, Angkor Wat is based on the model of the temple mountain symbolizing Mount Merou, home of the gods. Considered as the masterpiece of the Khmer architecture, this Vishnuite edifice is the King’s funerary temple. Inside the walls are covered with carvings and bas-reliefs depicting Hindu myths and the wars Suryavarman II waged during his reign. Stay at this magic place until the sun sets and witness how the warm evening light changes the appearance of the 2,000 Apsara dancers decorating the temple. 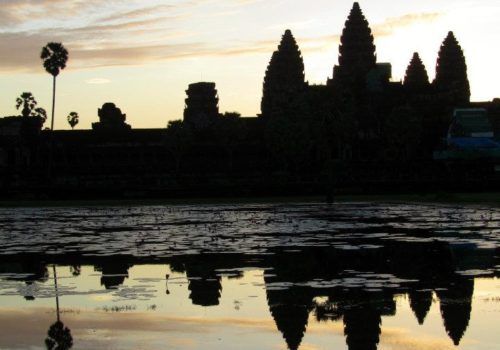 After breakfast you can choose one of the following activities. Overnight in Siem Reap.

Embark on a boat trip on the Tonle Sap Lake. This is the largest freshwater lake in Southeast Asia and officially designated as a UNESCO Biosphere Reserve, covering an area of around 250,000 hectares in the dry season. Due to a unique phenomenon, when the monsoon begins, the swollen waters of the Mekong River force the Tonle Sap River to reverse its flow northwards, feeding the Great Lake and spreading over the surrounding floodplain.

Board a local boat and visit Kompong Phluck, a village where you will see houses on stilts that are submerged when Tonlé Sap Lake extends. On the way, you will pass floating houses and impressive flooded forests. (Note: Due to low water levels during the dry season, the boat trip is only possible from June to March. However an alternative floating village at Chong Kneas can be arranged instead).

After breakfast you will head out to the beautiful Cambodian countryside, as you drive to the quiet Beng Mealea, around 65 km from Siem Reap. You’ll feel like a Victorian explorer when you discover the completely overgrown temple. Undiscovered for centuries, Beng Mealea has only recently been made accessible and remains unrestored. It is one of the very few temples that you can climb through. After your awfully big adventure, return to your hotel in central Siem Reap.

This evening you can attend a performance of ‘Phare, the Cambodian Circus’. Starting at 7pm, professional artists of Phare Ponleu Selpak (PPS) will perform an amazing show suitable for people of all ages. Set up in Battambang in 1994 by young returnee Cambodians from the refugee camps. They had learned about using art as a means of coping with trauma; PPS has played an influential role in promoting and developing Khmer culture over the years after the Khmer Rouge genocide. The hour-long show mixes traditional and modern theatre, music, dance, acrobatics, juggling and contortion performed in a story about Cambodian life and society.

After an early breakfast, embark on a private boat across Tonle Sap Lake to Battambang. You will pass floating villages and flooded forests, observing the life on this body of water that forms Cambodia’s heart. Packed lunch on board. (Note: This boat trip is only possible in the high water period from July to December as water levels are too low during the dry season and transfer times can be extremely long. From January to June alternative transfer by road.)

Arrive in Battambang and enjoy some rest at the hotel. This afternoon, explore some of the many villages around Battambang, where you will learn how the locals produce rice paper, prahoc (typical Cambodian fish paste), grolan (sticky rice stuffed in bamboo), and other Khmer treats.

Spend the morning on a tour that combines walking, a boat ride and then cycling along and across the Sangke River. The tour includes prayers with monks and a talk about the city’s artistic heritage.

Start the day early and get fitted for your bicycle (either a mountain bike or sturdy basket bike).

Take a tour of the main market, Psar Nath, where you can sample the local coffee. Visit Wat Povil temple and take the opportunity to pray with the monks. It is usually possible to accompany the boats back across the river as they begin their morning alms collection.

Once back on the other side, it’s time to begin the bike tour. You’ll visit the historic 2.5 Street along with a Thai temple before you arrive at a market. It’ll be time for a coffee or a sugar cane juice. Continue a short distance to Wat Kor Village, known for its many old Khmer heritage houses built around a century ago. You’ll get the chance to visit one of the best-preserved homes.

In the afternoon head to the Bamboo Train station. The Bamboo Train has been set up by the villagers in order to facilitate the transportation of goods and persons, as there are no regular trains. The “train” itself is very basic: a bamboo platform on 4-wheels is activated by a small motor. Sitting on the platform, you’ll travel the 8 km to the next station through beautiful landscape and rice paddies. An amazing experience – a true rollercoaster ride without loops!

Then you can head towards Phnom Sampeau – “Ship Hill” – due to its distinctive shape, and one of the few hills standing out in this otherwise pancake-flat plain. From the small temple on the top, you will have a fantastic view of the landscape of paddy fields and sugar palm trees.

Phnom Sampeau is home to the notorious killing caves, which are cruel reminders of Cambodia’s troubled past. Serenity and inhumanity represented in one place make for an interesting and unnerving visit. If you choose to visit at dawn you’ll see millions of bats emerge from a cave and take to the sky, creating a dazzling spectacle.

Depart from Battambang for the overland transfer to Phnom Penh.

Starting early you’ll travel to Kampong Chhnang, known for its unique pottery – with many kilns at work in this province. In a village near Kampong Chhnang, you’ll see the different aspects of pottery making and also experience the production of traditional rice wine.

Continue to Oudong, the former royal capital of Cambodia. The drive passes through many rural villages and pagodas, and you will see the temple mountain with its dozens of stupas. Upon arrival at Oudong enjoy a traditional Khmer lunch at a picnic hut at the foot of the hill.

Before heading to Phnom Penh take a look at the spectacular Vipassana Dhura Buddhist Meditation Centre, also located in Oudong. Your guide will explain more about the school of Vipassana (Insight Meditation) as you tour the centre. Don’t forget to see the impressive jade Buddha, the mummified monk and the brightly painted walls telling the story of the Ramayana, the epic Sanskrit poem that decorates many pagodas seen around the country.

You’ll be back in Phnom Penh by the late afternoon.

The evening is at your leisure.

This morning a driver will take you on a tour of the most remarkable sights of Phnom Penh in a Cyclo: an old-fashioned Phnom Penh means of transportation.

Head to Wat Phnom temple, the founding place of the city on a small hilltop; then continue along the riverfront to the Royal Palace. This palace dates back to 1866 and houses the Silver Pagoda, named after the 5000 heavy silver tiles that cover its floors. Its original name is Wat Prakeo, meaning Temple of the Emerald Buddha. Here you will view a marvellous collection of Buddhas in gold, silver, crystal, and bronze.

The afternoon is all yours to explore the lively capital and its markets.

Today, it’ll be time say farewell to Cambodia. We’ll arrange your trip to the airport for your flight home.