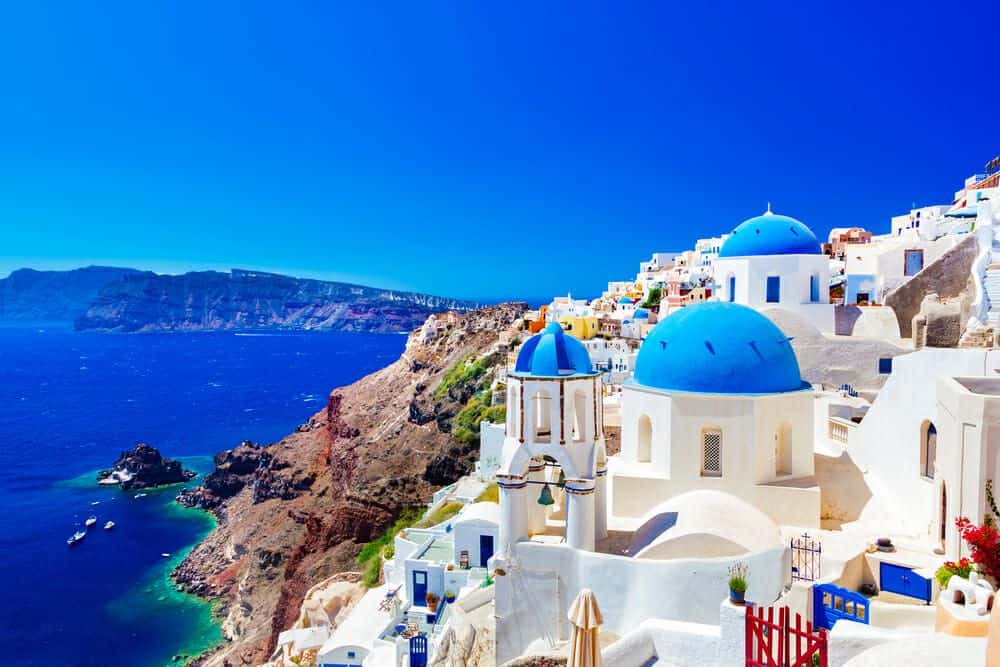 The Out Of Office guide to Greece's most romantic island

Santorini is the most romantic of the Cyclades islands. Located in the south Aegean Sea 120 miles from the Greek mainland, it’s one of the two locations in Europe to have a desert climate. The other is Anafi, also a Greek island. Santorini is instantly recognisable. Its blue domes and caldera sunsets can be seen in the background of so many posts by Instagram “influencers.” It’s a place to be seen and be photographed in. You won’t need a filter. 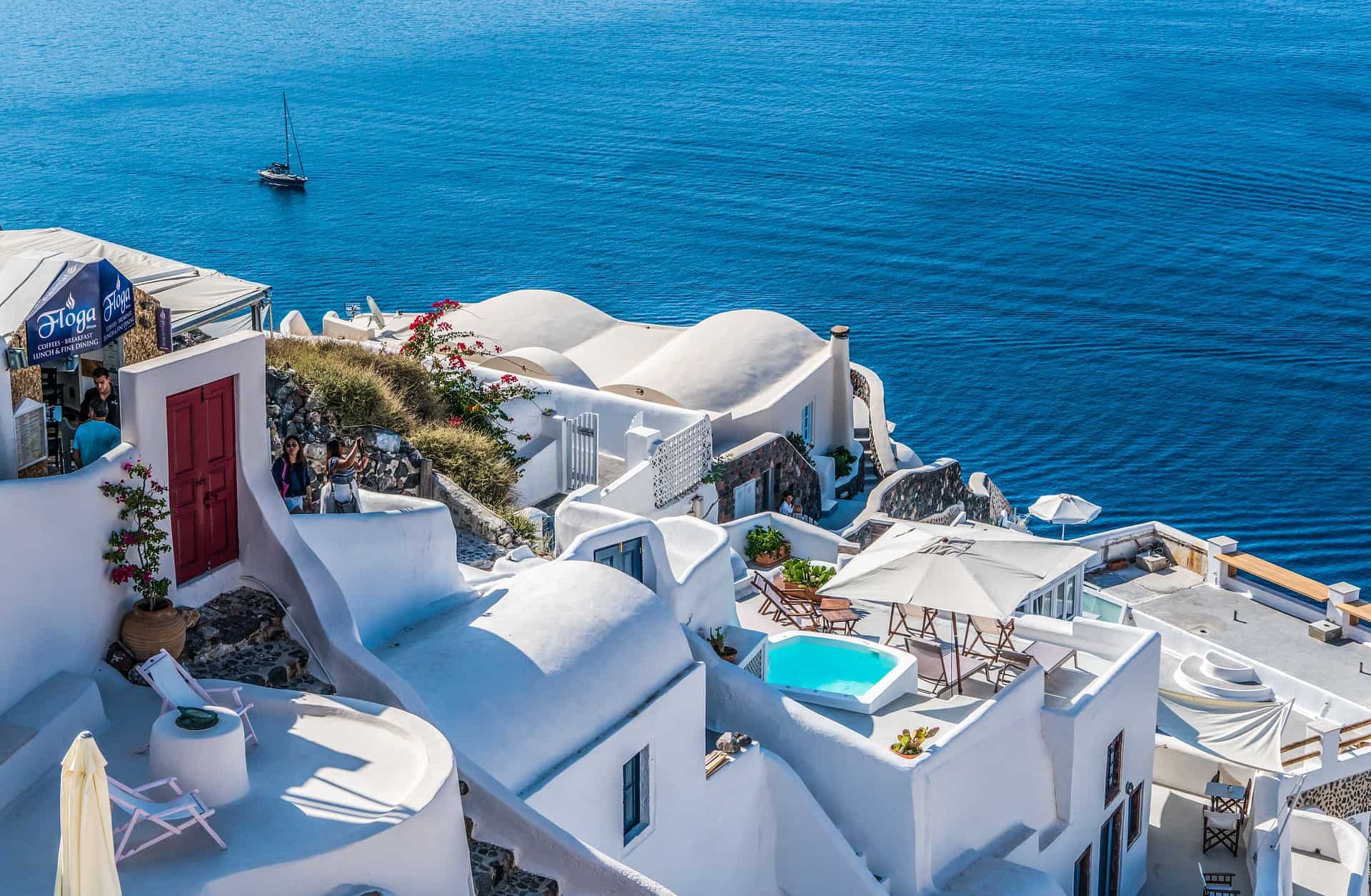 What is Santorini famous for?

The origins of Santorini are very dramatic. Rivalled only by the fall of Troy, the great story of the ancient Aegean was the volcanic eruption at Thera. It took place around 3,500 years ago and it was one of the greatest eruptions in history. Santorini was the epicentre of the eruption. It led in no small part to the decline and fall of the Minoan civilization. Plato’s story, Atlantis, recounting a great civilization sinking into the sea, was probably inspired by the eruption at Santorini. At the centre of Santorini is the caldera, into which much of the island collapsed after the eruption.

Since this dramatic geological event, life on Santorini has been relatively peaceful – interspersed with a handful of smaller eruptions. It is now one of the most exclusive holiday destinations in the world, and a perennial favourite for honeymoons. It’s booming tourism trade has allowed it to weather Greece’s economic downturn.

Some of the best hotels in Europe can be found on the island and it’s also the perfect destination if you’re looking for a gay honeymoon in Santorini. The minimalist Cycladic style of whitewashed walls and lightly accented colours started there. This unique style represents a high point in aesthetics. It’s the essence of unpretentious luxury. 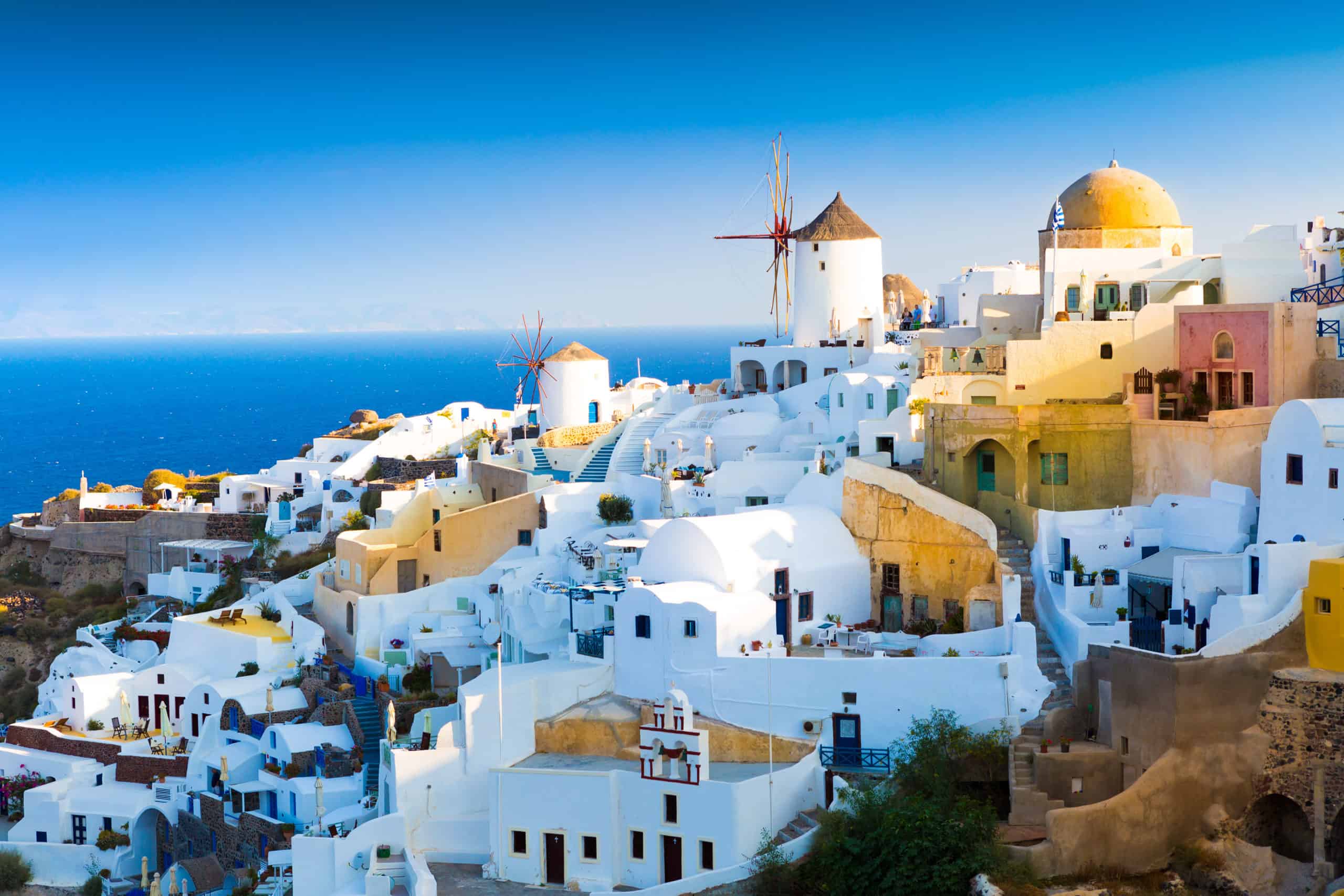 Things To Do In Santorini

Fira is the capital of Santorini and it’s the largest settlement on the island. To get to Fira you can take a cable car or a donkey. Donkeys are the traditional mode of transport on Santorini. As millions of people visit the island every year, those poor donkeys are a little overworked, so taking the cable car may be the most ethical option.

You’ll fall in love with the winding streets of Fira. The direct caldera views are breathtaking – Thira is 400 metres above sea level. At night you’ll be greeted with one of the most romantic sunsets in the world. The bars and restaurants will be full and a party atmosphere prevails. You’ll find many of the best hotels in Santorini in or near Thira. Some of our favourites include Eros and Santo Maris Oia.

When you’re in the capital you’ll no doubt want to visit the Museum of Prehistoric Thera. You’ll see some fascinating objects chronicling the long history of Santorini stretching way back to Neolithic times. 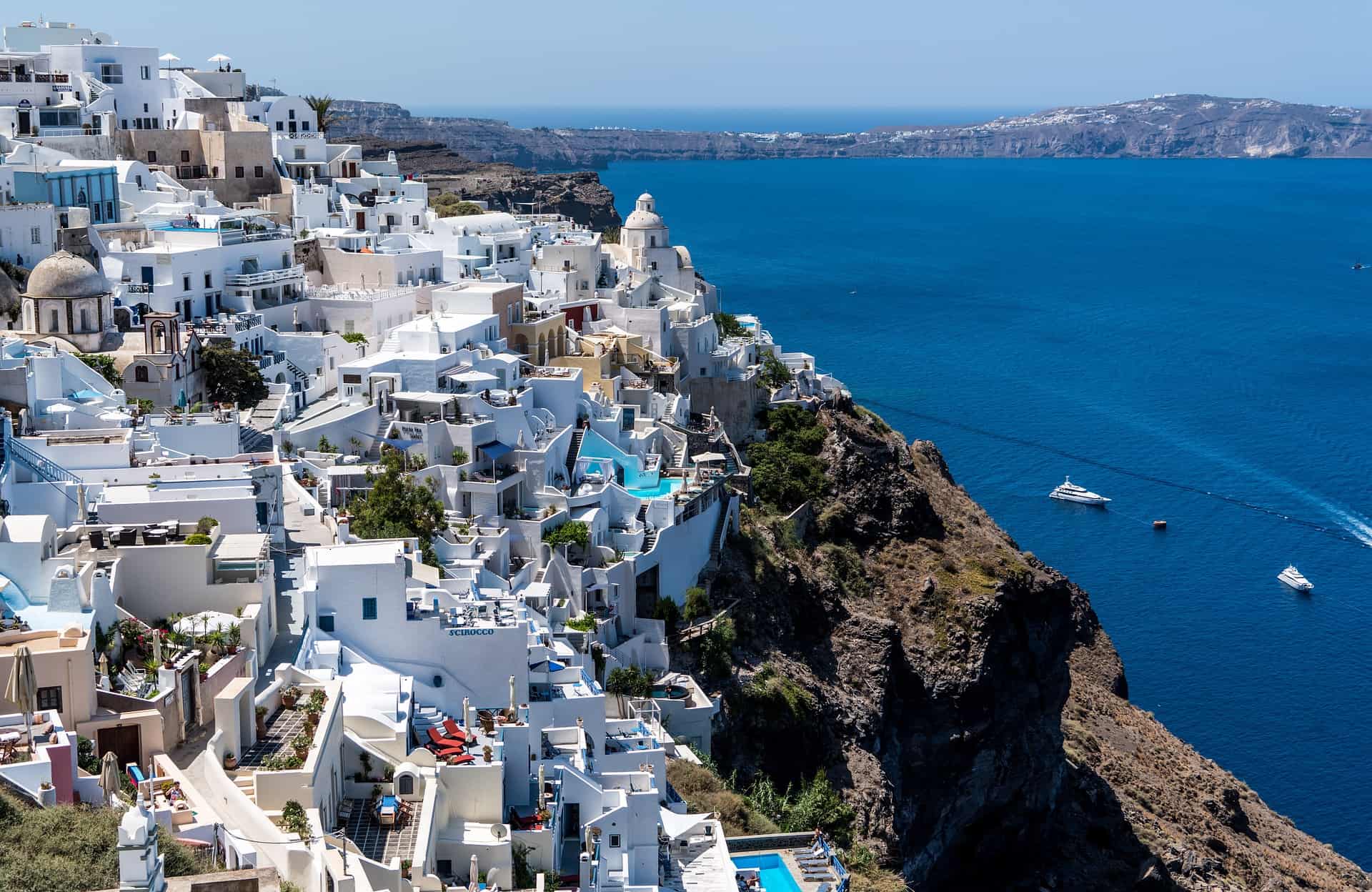 The village of Oia the second biggest settlement in Santorini. It’s full of little shops, restaurants and blue-domed churches. Oia offers unbeatable views of the caldera, the Aegean and the rest of the island. You can explore the galleries and the little English language bookshop. At night people gather to watch the sunset from the main street and the towers. If you head towards the Kastro you’ll be greeted with direct caldera views. As Oia is so popular, you’ll find no shortage of bars and restaurants. It’s one of the most romantic settings in Europe. It can get very busy in peak season, as can Thira.

Imerovigli Village is located at the highest point of the caldera. It’s known as “The Balcony of Santorini”. You can get to the caldera by walking from Imerovigli’s main square. This village is a must-visit when you’re in Santorini – it’s only a 20-minute drive from Imerovigli to Oia. It’s also close to Skaros Rock, a fortress used to protect the island from pirates in the Middle Ages. If you don’t mind heights and you fancy a physical challenge the ruins of Skaros are worth a visit. You’ll pass the blue-domed Ekklisia Theoskepasti church on the way and many little cafes and restaurants. 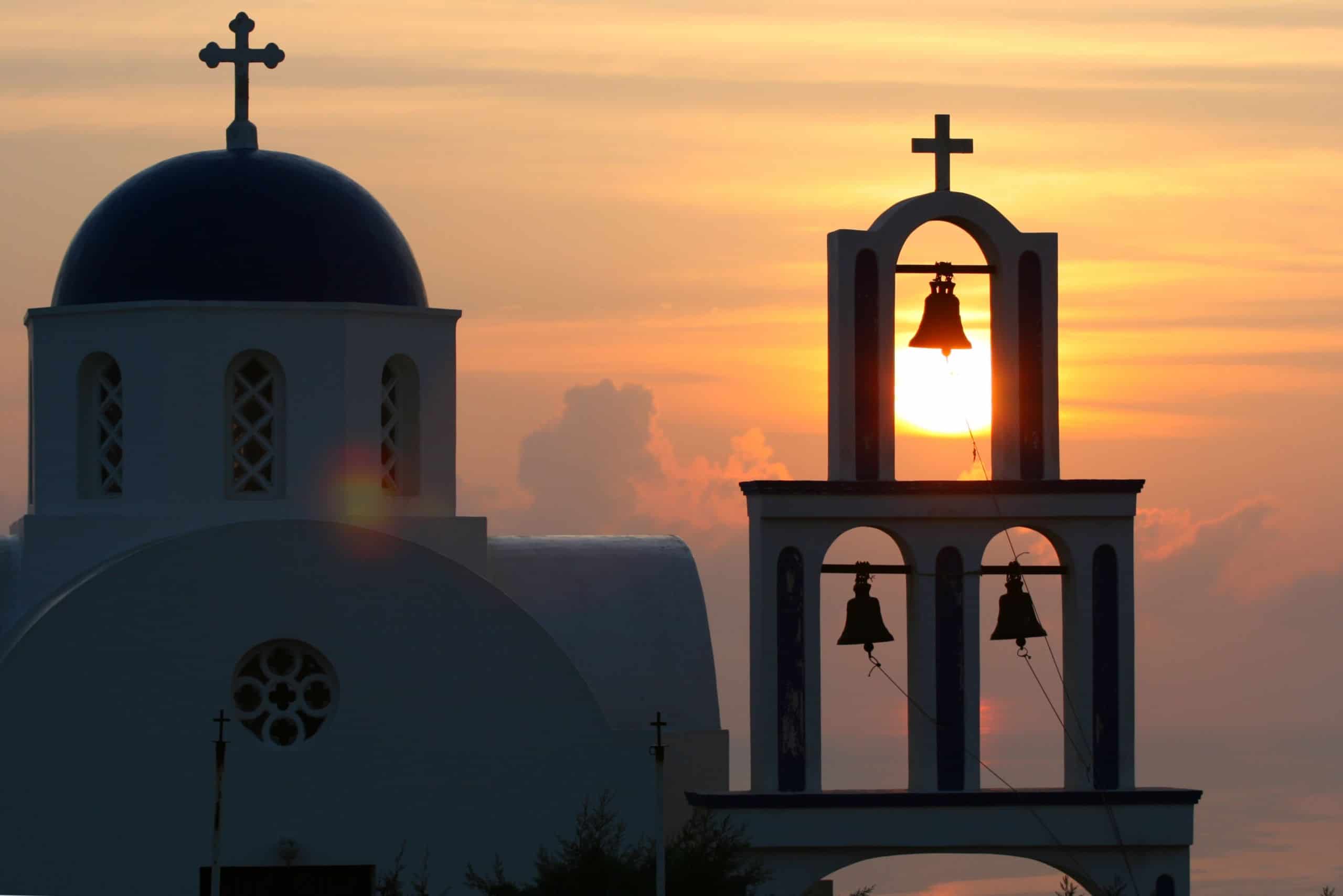 Before the ancient Greeks we know and love today, a lesser-known civilization flourished in the Aegean. The Minoans wrote in a language that is still undeciphered so little is known about them. Much of what remains can be found at Akrotiri in Santorini. You may be wondering how to get to Akrotiri – can you rely on Greek public transport? Buses go from Fira and most of the major towns. They’re pretty consistent in high and mid-season. If you hire a car you can take an interesting diversion.

The village of Akrotiri is rarely visited as the main road leading to the archaeological site doesn’t pass through it. Few tourists see it so it’s never crowded, even in peak season. You can dine in a tiny, family-run cafe and get a more authentic taste of Cycladic culture.

Akrotiri’s archaeological site is the Pompeii of Greece. The frescoes painted by Minoan artists have survived from the Bronze Age, giving you a rare glimpse of life at that time. It’s definitely worth spending a couple of hours here and seeing some of the oldest surviving artworks in Europe. To put things in perspective, consider the fact that Akrotiri is almost twice as old as Pompeii. 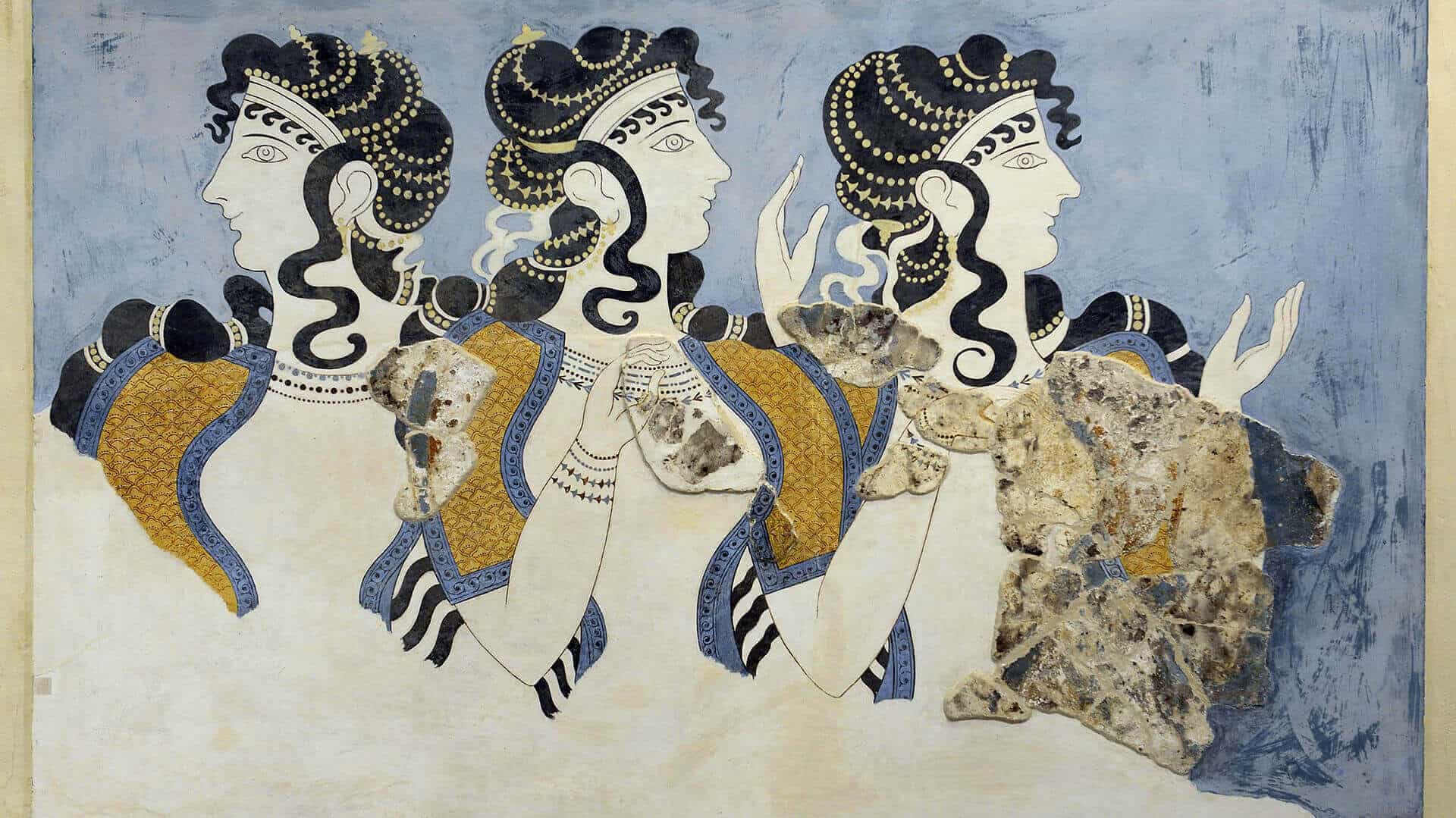 How To Get To Santorini

Your trip will begin in Athens, the perfect starting point for a Greek island-hopping adventure. This is where you’ll catch the most reliable and frequent transfers. We’d recommend spending at least a night in the Greek capital. There’s so much to do and see, not least the Acropolis. You can then fly direct from Athens to Santorini.

As Mykonos is just a two-hour ferry ride from Santorini, combining the two islands makes for the perfect itinerary. If you’d like to do both then you’d travel from Athens to Mykonos first (it’s closer) and then end your trip in Santorini.

The early morning ferry from Athens to Mykonos takes around 4-hours. The later ferries will take a bit longer. If you intend to travel directly to Santorini from Athens we’d recommend flying as the ferry ride takes up most of your day. 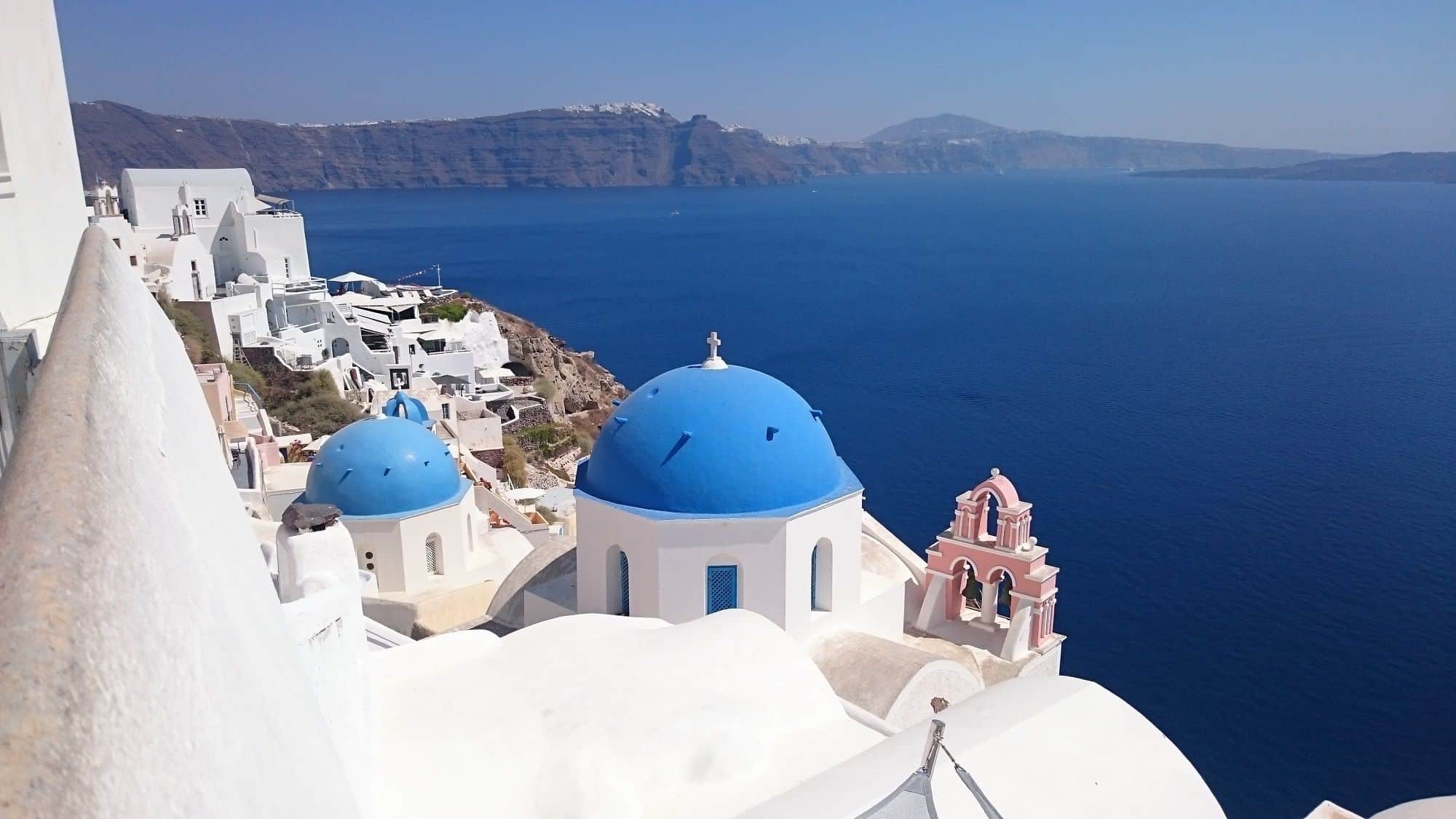 High season runs from April to August. As Santorini is one of the most visited islands in Europe, it can get crowded. It will be busiest in the months of August and July. When we say busy we mean busy. The streets of Oia will be teeming with thousands of people. It will be noticeably less busy in September and October, but still buzzing.

Supposing you’d like to ditch the crowds and travel in low season, you’ll be greeted with peace and quiet (also lower prices) but a lot of businesses will be closed.

Santorini is one of the great honeymoon destinations. If you’re looking to plan a Greek honeymoon we can tailor-make the perfect experience. 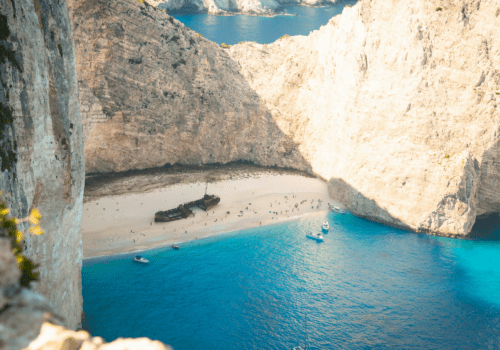 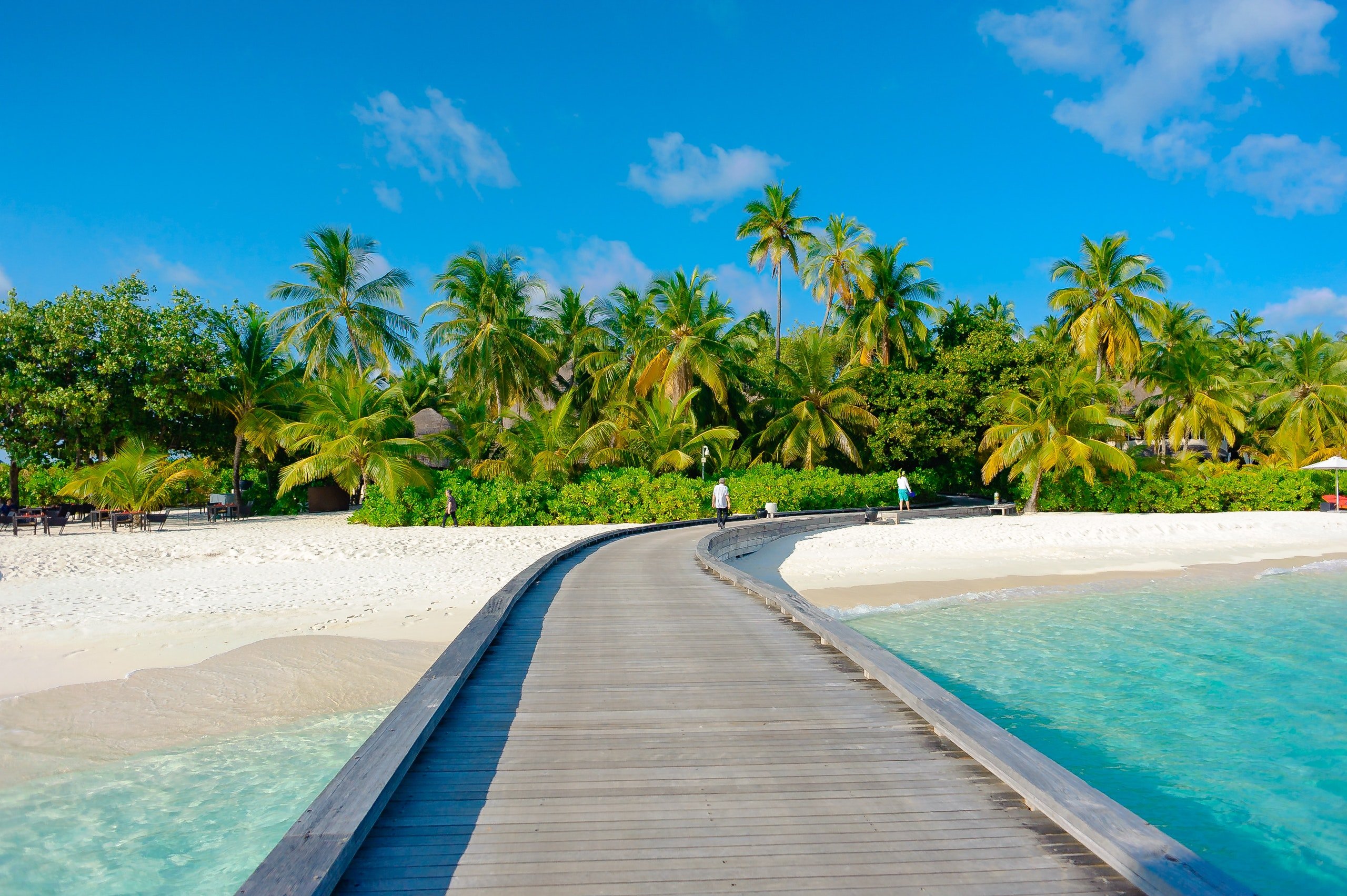 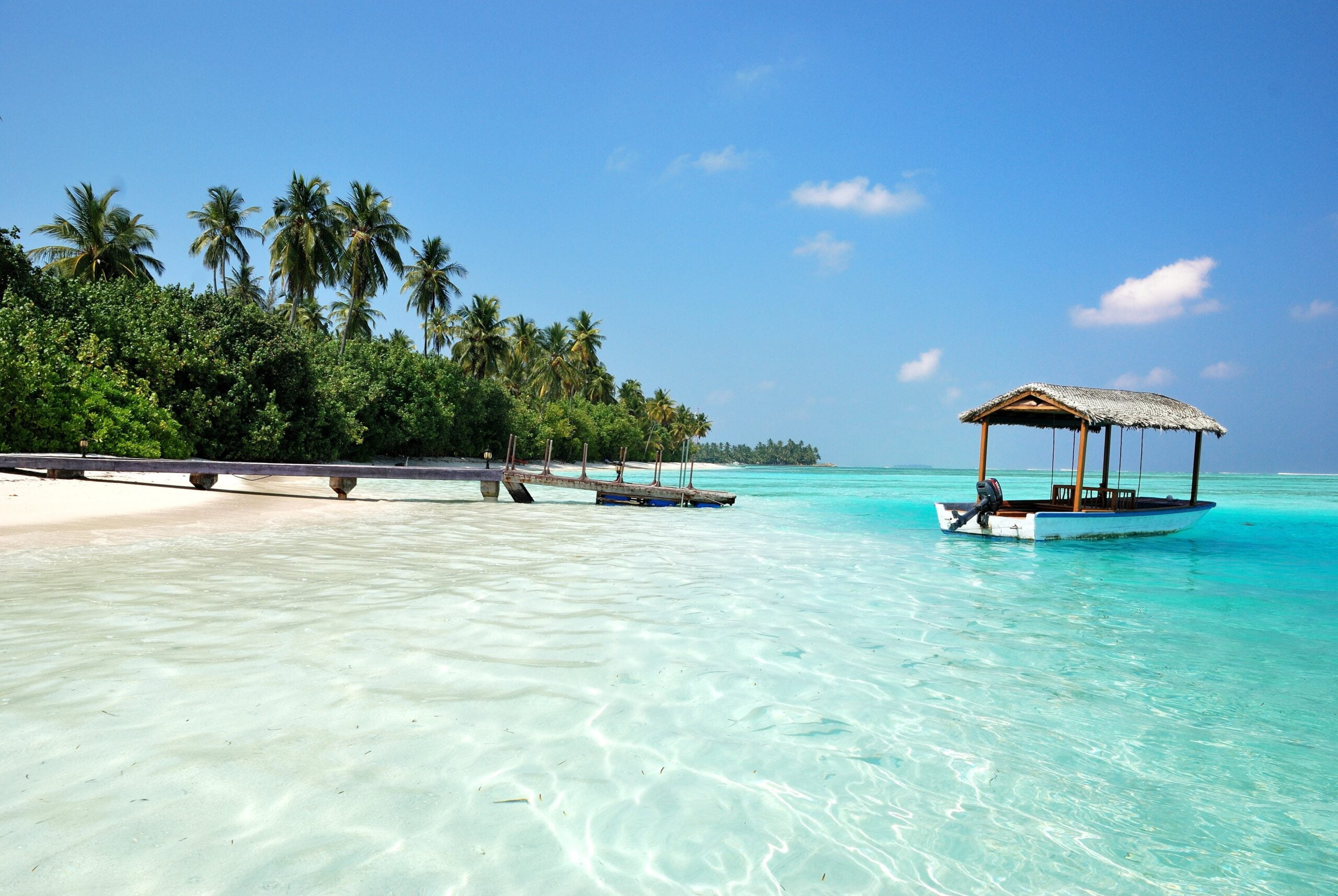 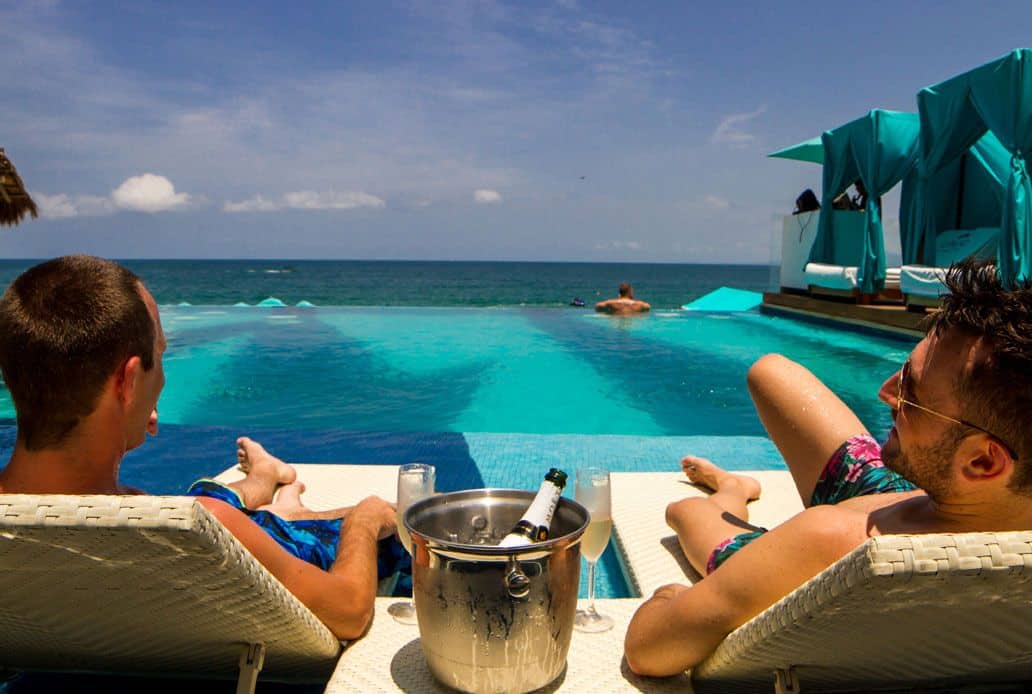 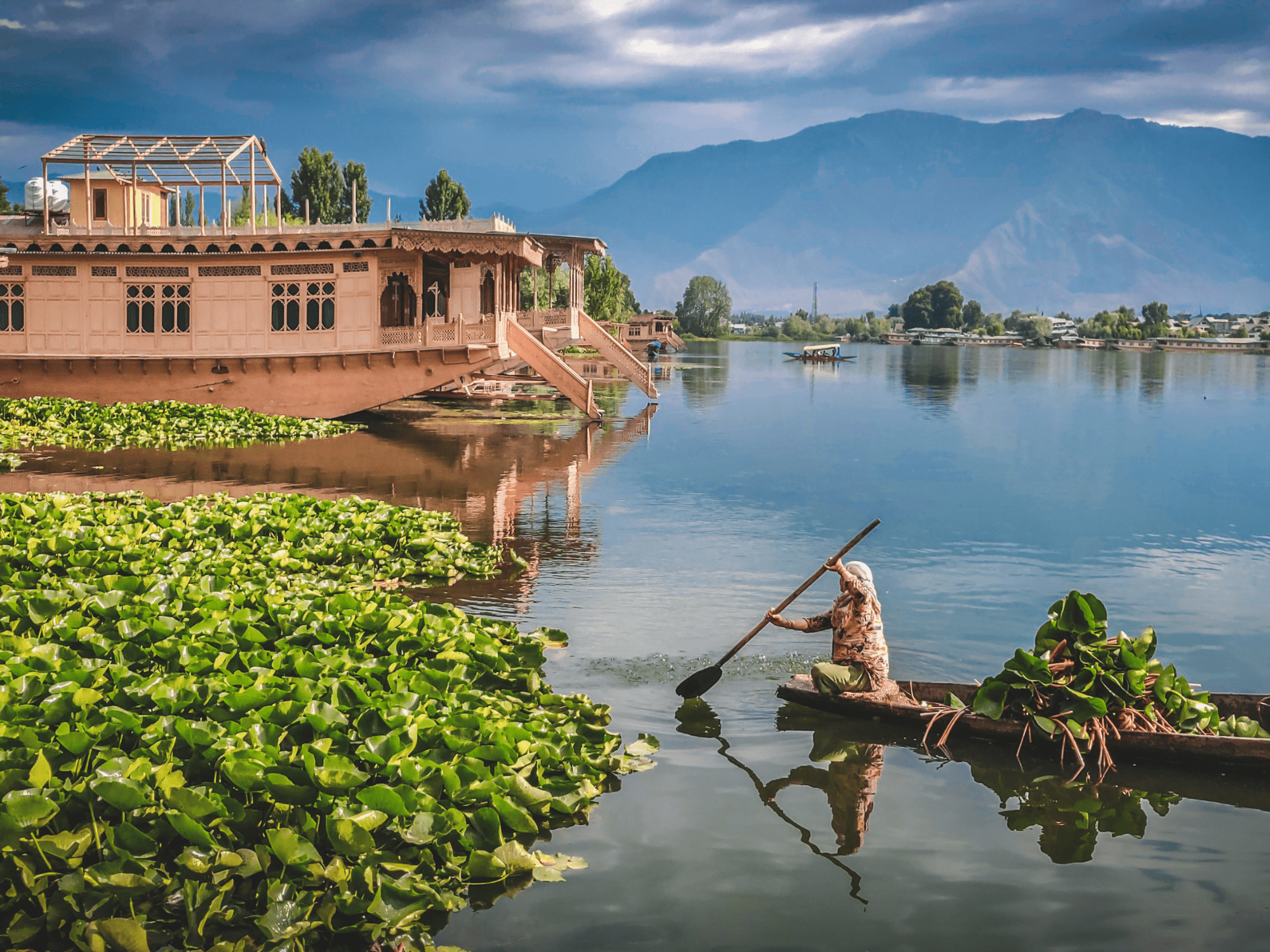 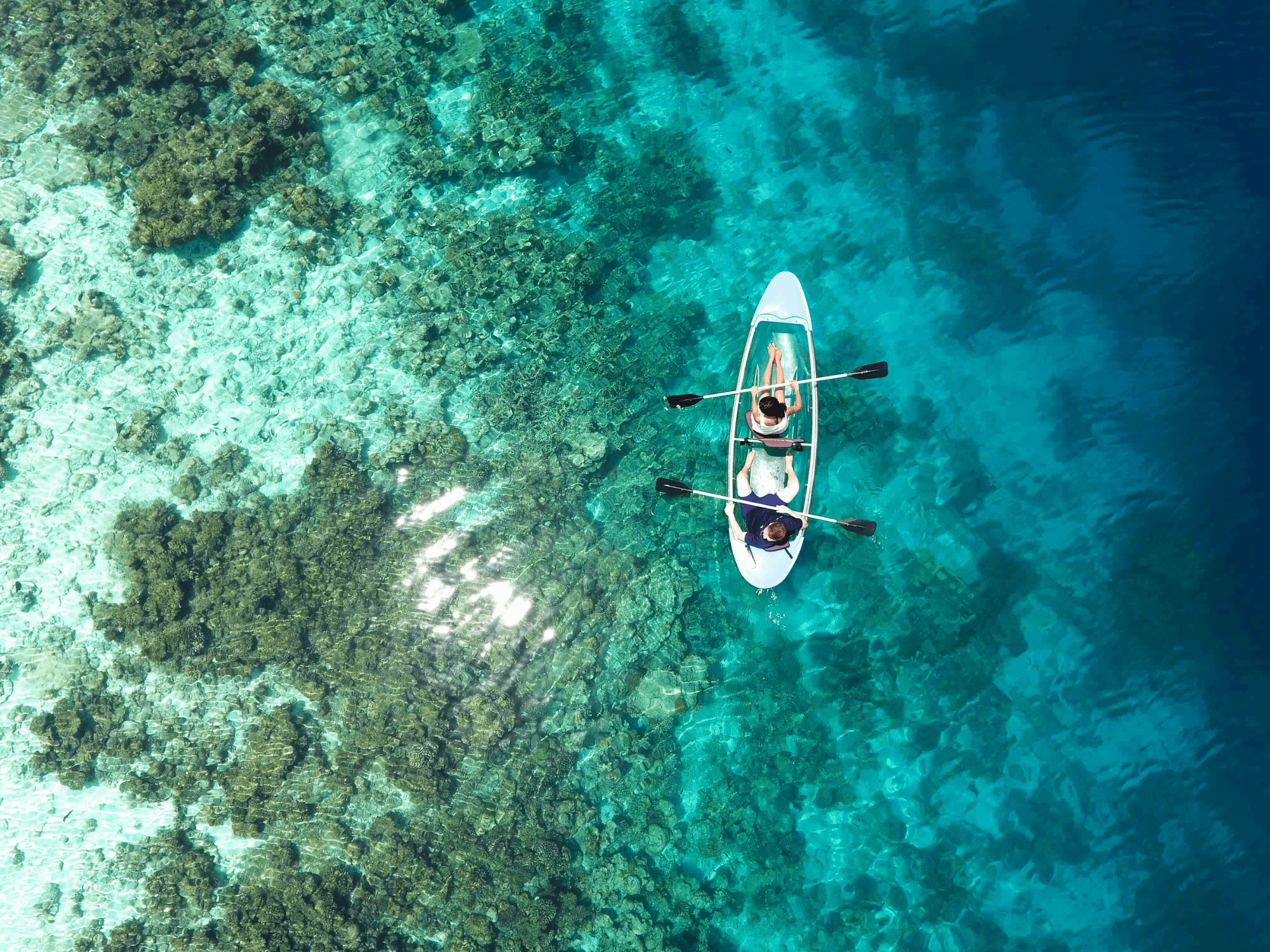 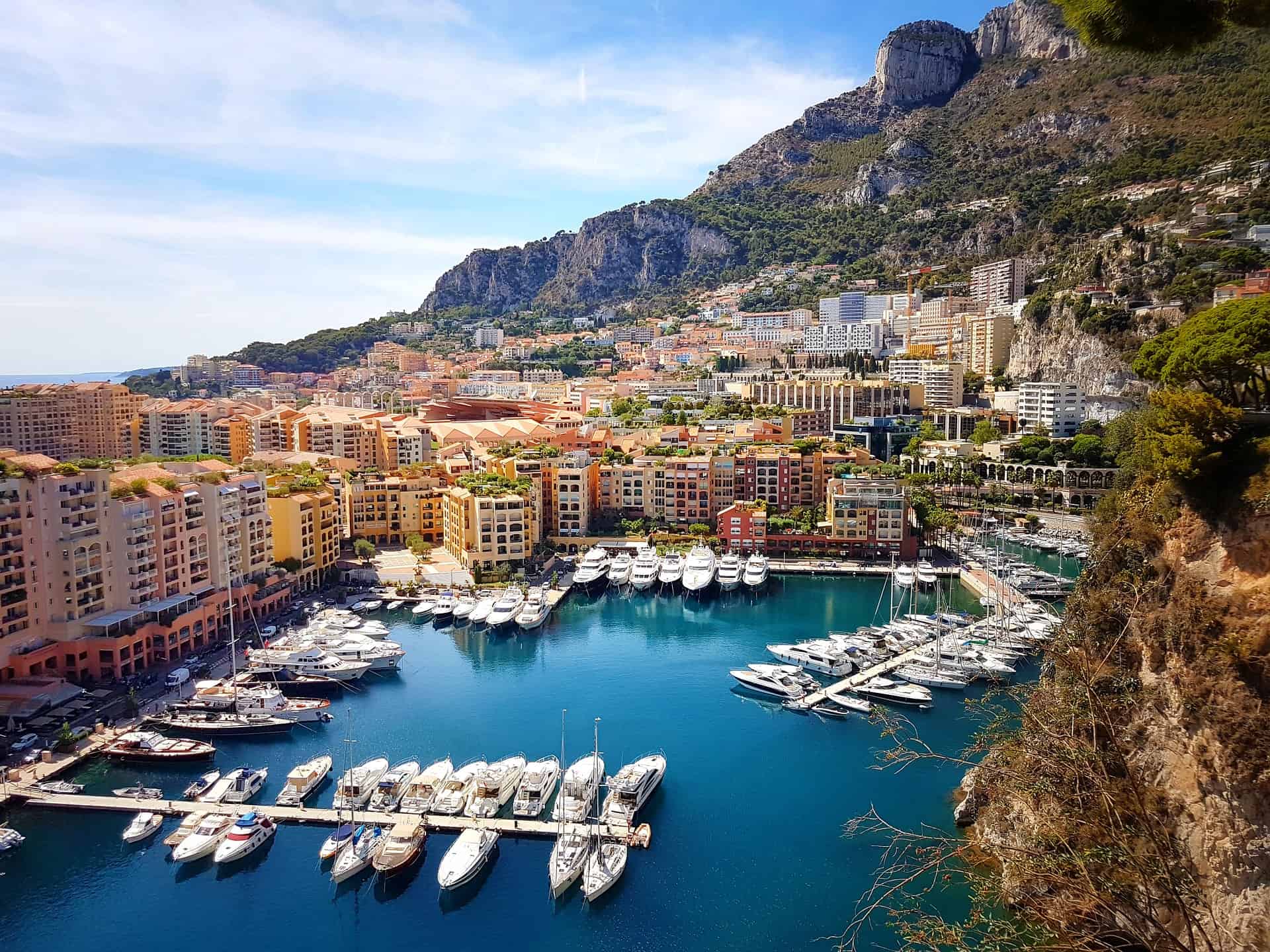 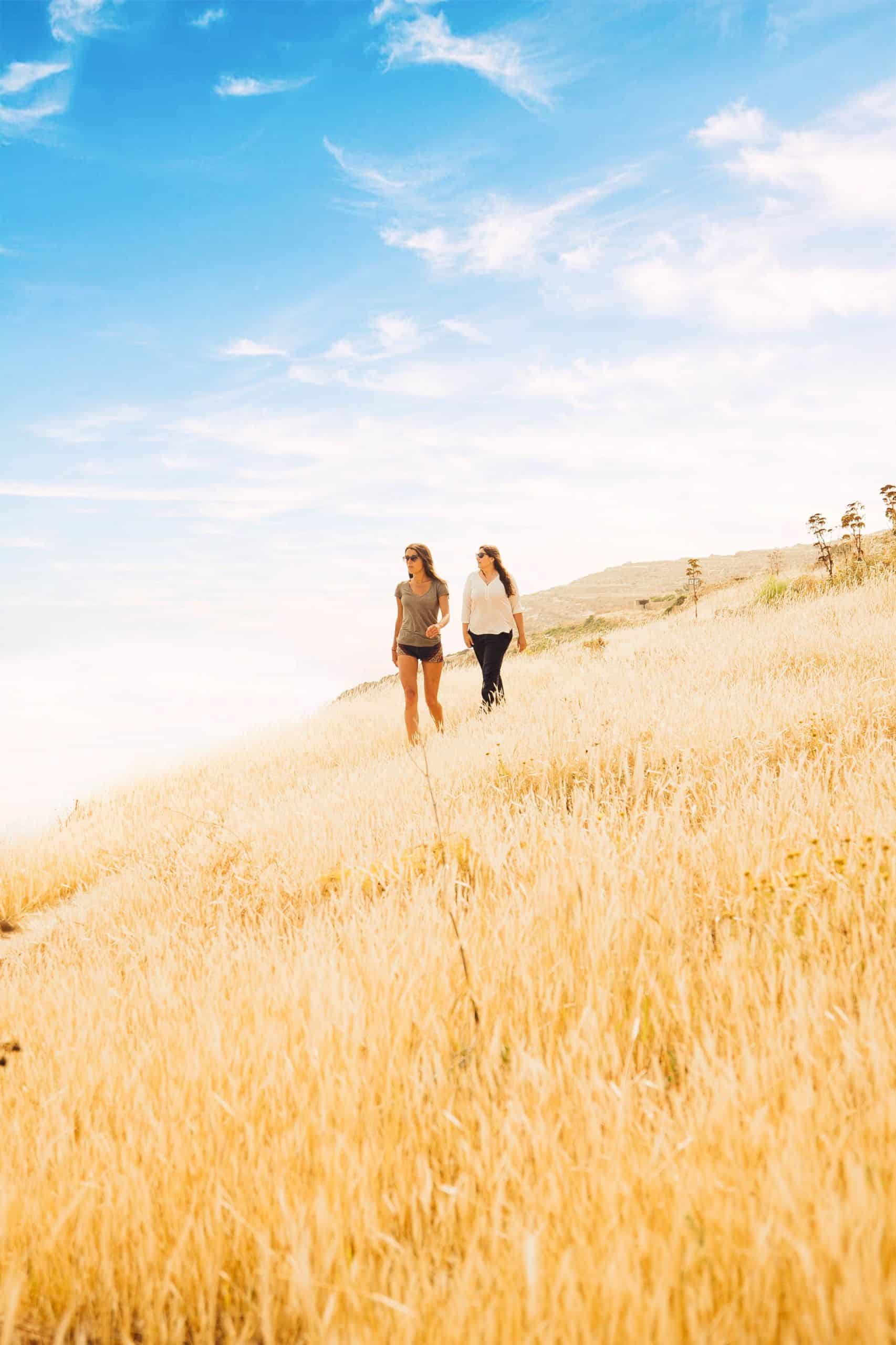 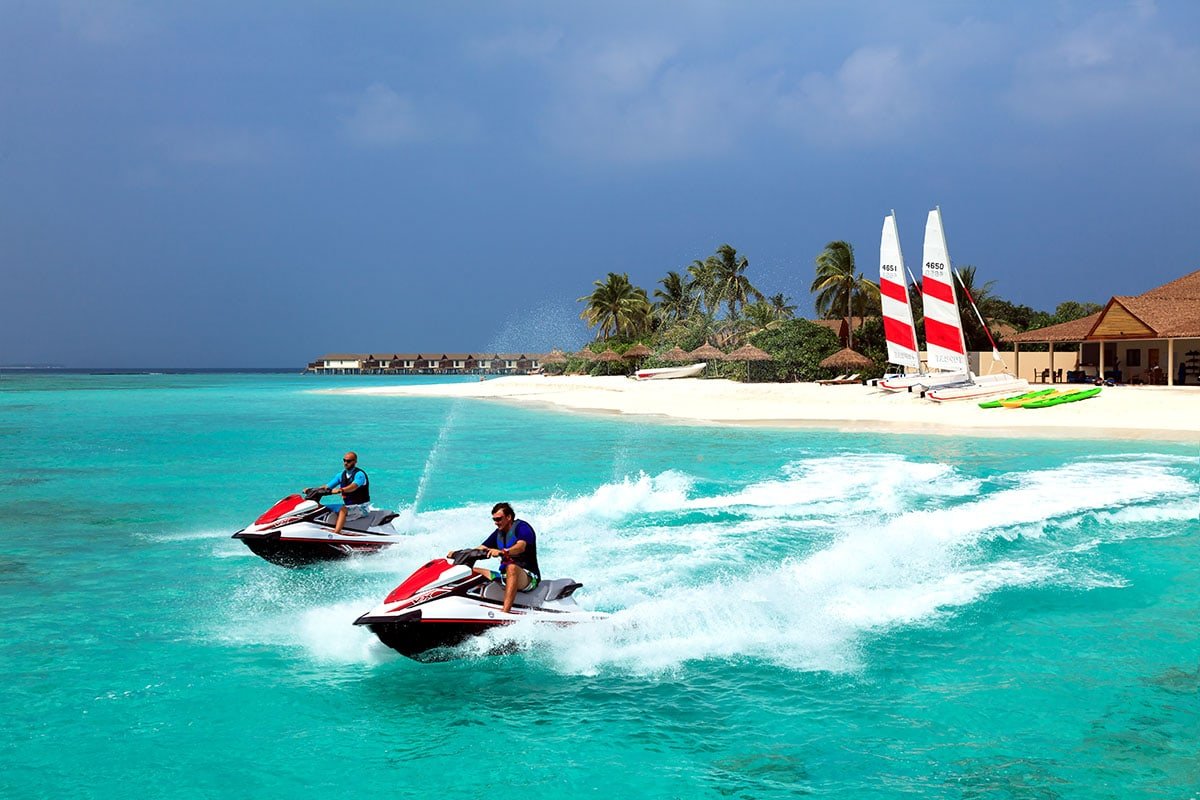 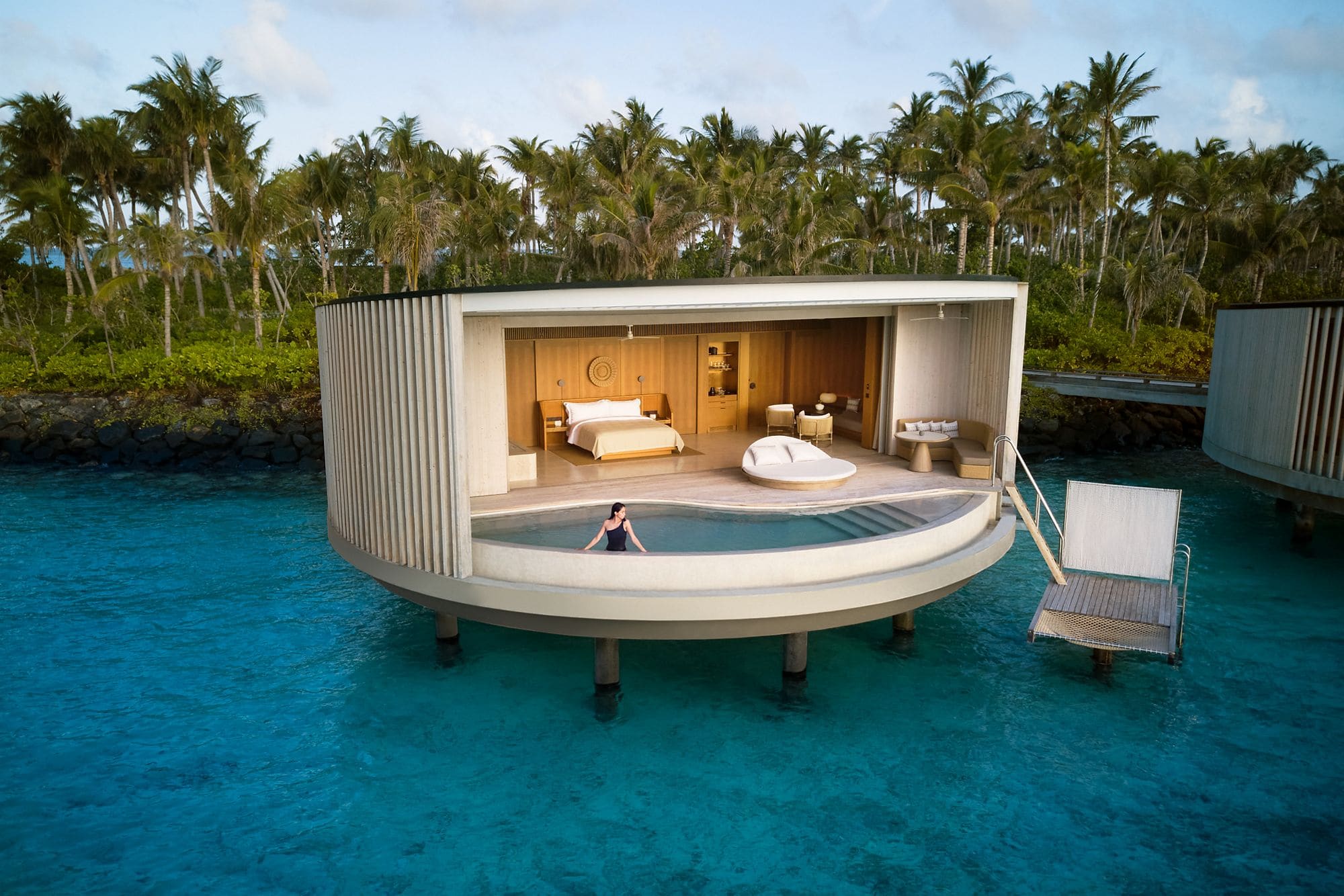 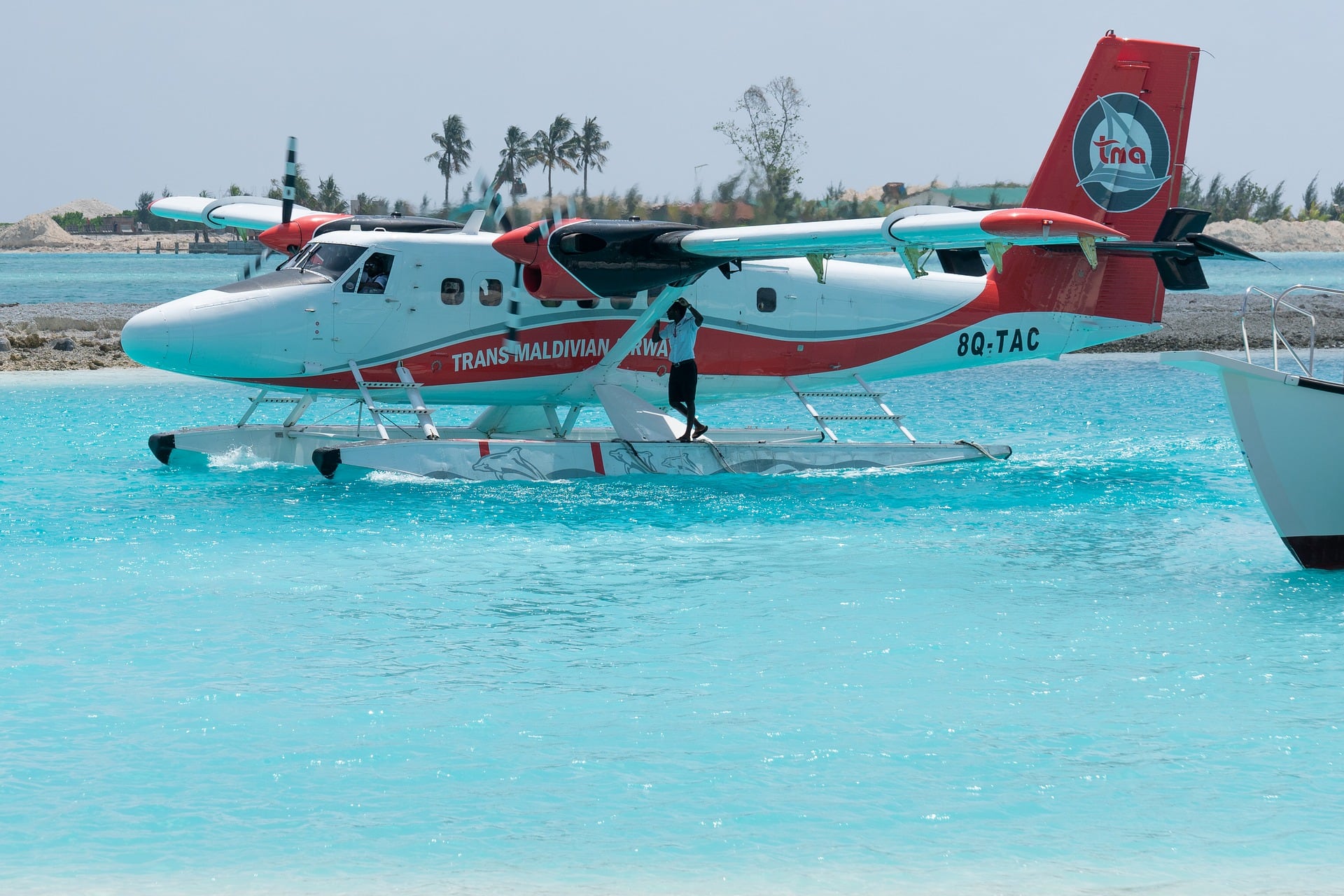