Casa Kimberly is the former home of Elizabeth Taylor and Richard Burton, probably the most glamorous celebrity couple of the last century. They purchased the property in the 1960s when Burton filmed The Night Of The Iguana in Puerto Vallarta. Back then it was just a small port town. The arrival of Taylor and Burton turned it into a fashionable destination. It is said that the couple fell in love here.

Casa Kimberly comprises of two homes connected by a bridge. A replica of Venice’s Bridge Of Sighs, no less. One of the properties was for Taylor, the other for Burton. This was their oasis away from the prying eyes of the paparazzi. Taylor sold Casa Kimberly in the early 90s and it was turned into a hotel in 2015. 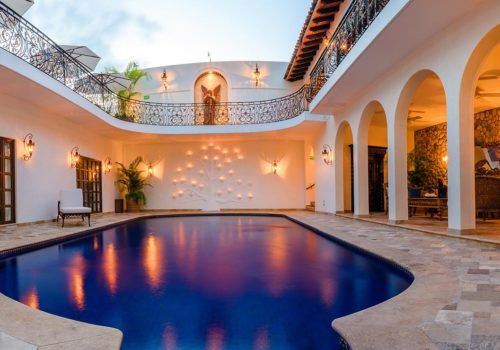 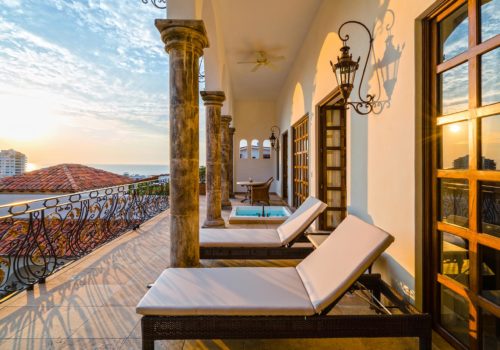 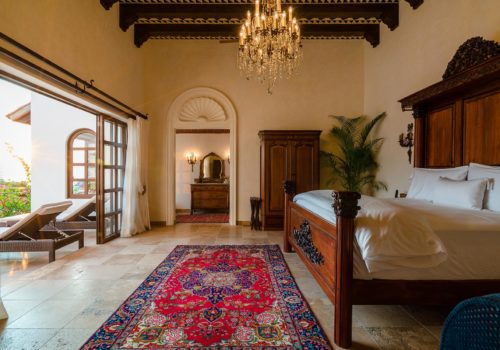 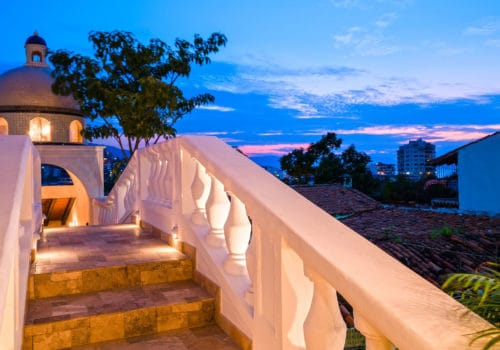 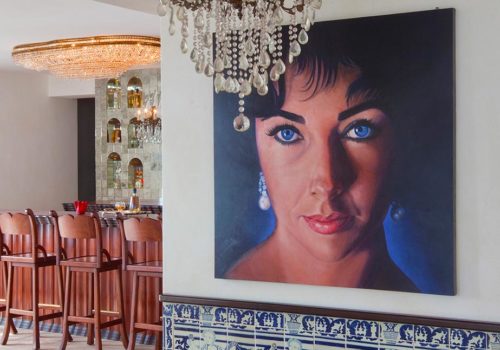 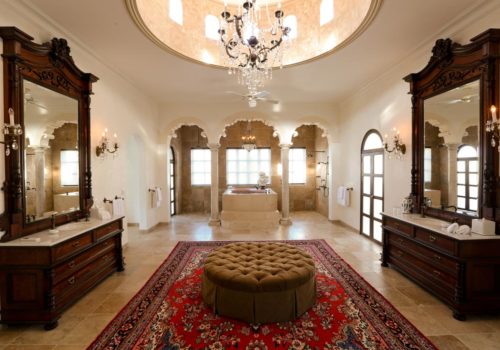 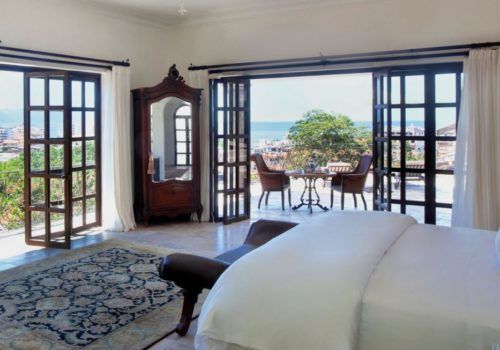 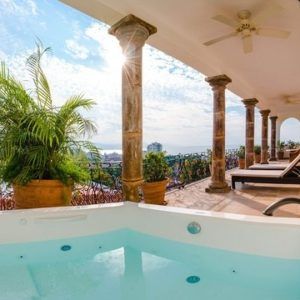 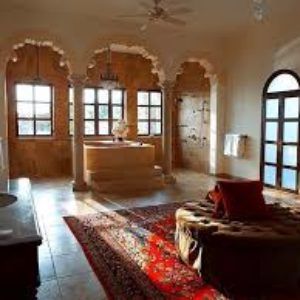 This is your chance to live like Hollywood royalty in Elizabeth Taylor’s bedroom. Accessed by a private elevator, its wrap-around terrace has a private jacuzzi and stunning views of Banderas Bay. A Swarovski crystal chandelier presides over the Mexican Colonial bed and illuminates a dome decorated with hand-painted winged cherubim.

The bathroom’s centrepiece is the original pink-marble heart-shaped tub Elizabeth Taylor commissioned and used herself. 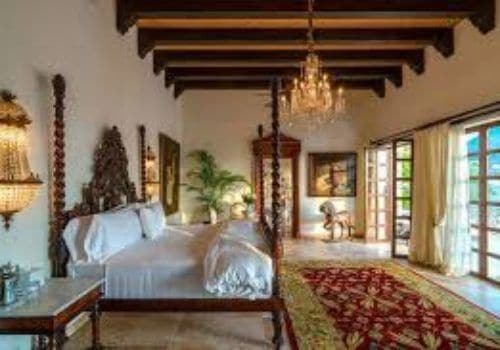 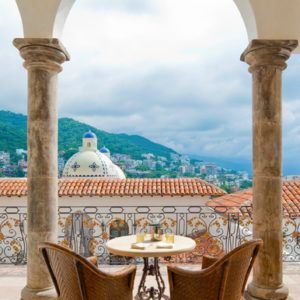 Named, of course, after the film Taylor had just made before she took up residence in Puerto Vallarta, this is a suite fit for Royalty. Cleopatra herself would have approved of it.

The colonial king-sized bed is complemented by a crystal chandelier and an antique armoire. The bathtub is positioned to give you views of the rooftops of the town and Bandera Bay. Through the French windows, you’ll find a private patio with a sunken jacuzzi. 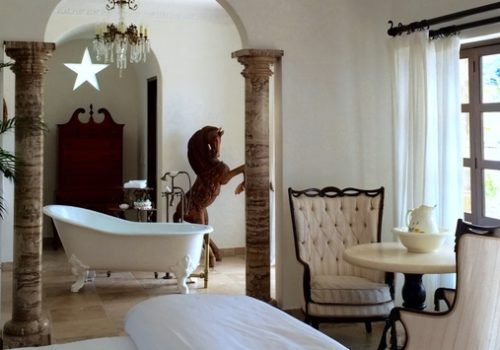 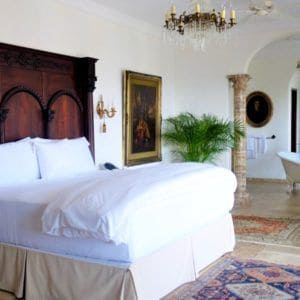 The Velvet suite is named after Taylor’s debut film, National Velvet, filmed in 1944. Located on an upper floor, the suite boasts sweeping views of the town. The hand-carved King Size bed is complemented by elegant antiques, an Oriental rug and a crystal chandelier.

Through the sliding doors, you’ll find a private terrace with a raised jacuzzi. 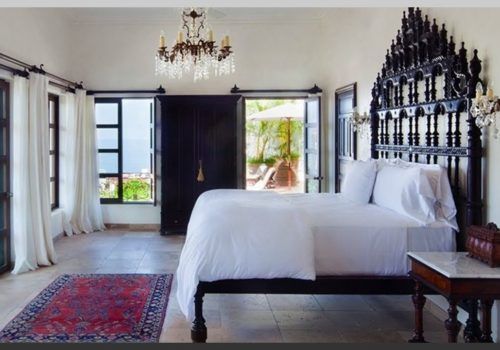 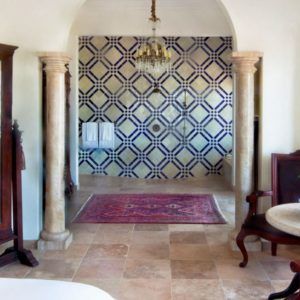 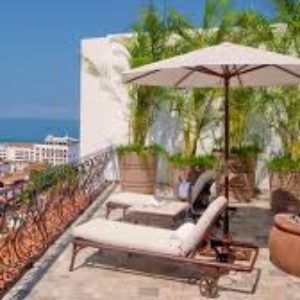 Located on the top floor of the residence, this suite is named after one of Taylor and Burton’s movies. Its wrap-around terrace offers panoramic views of Purto Vallarta. You’ll hear the trickle of water from the stone and tile fountain as you recline outside.

The Colonial king-size bed is accompanied by a marble-topped side table and striking antiques. Hand-painted ceramic tiles cover the bathroom wall. 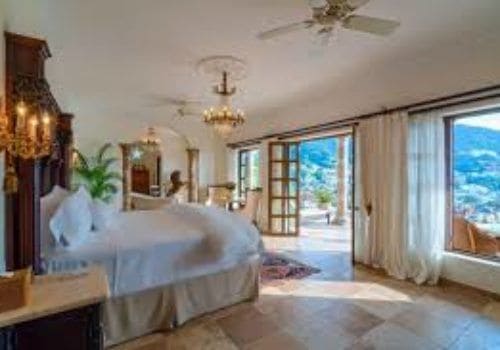 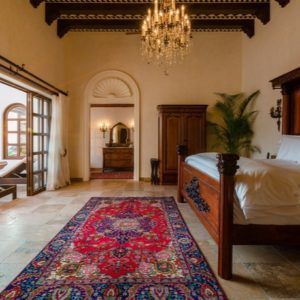 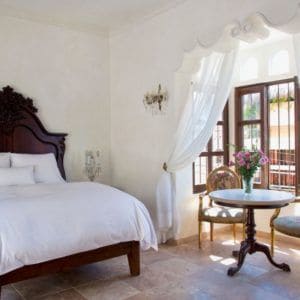 All of the hotel’s suites offer the height of luxury and each one is huge. The properties storied former owner’s presence is still felt in every room. You’ll find pictures of Elizabeth Taylor on the walls, bathe in her bath and wake up to the same views she did. The pool is the exact same pool they used. You can imagine the legendary parties they would have hosted. 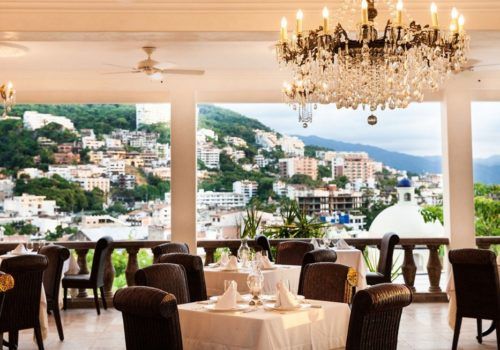 The hotel’s restaurant serves contemporary Mexican cuisine to a very high standard. The setting is divine, as is the wine menu. You’ll also find a wide selection of tequilas and mezcals at the bar. Breakfast is served here or it can be brought up to your private terrace. 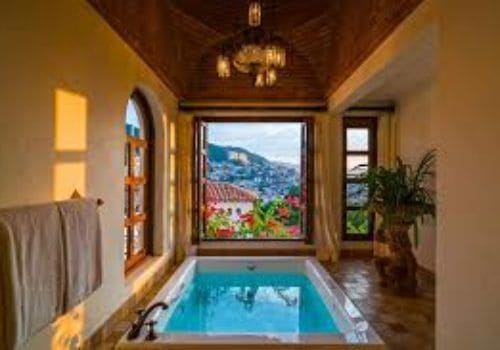 Choose from a range of luxury treatments from the spa menu, such as reflexology, aromatherapy massage and salt scrub massage. You’ll need to pay for spa treatments in cash.